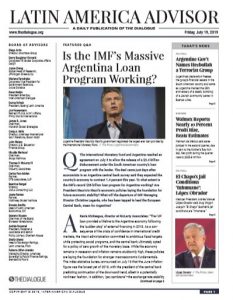 On July 19, The Dialogue published commentaries on the IMF’s loan program in Agrentina by Cefeidas Group’s political and regulatory risk lead specialist, Megan Cook and analyst, Rayan Akill. They commented on the extent to which the IMF program is working for Argentina, responding to the following questions:

The International Monetary Fund and Argentina reached an agreement on July 5 to allow the release of a $5.4 billion disbursement under the South American country’s loan program with the lender. The deal came just days after economists in an Argentine central bank survey said they expected the country’s economy to contract 1.4 percent this year. To what extent is the IMF’s record $56 billion loan program for Argentina working? Are President Mauricio Macri’s economic policies laying the foundation for future economic stability? What will the departure of IMF Managing Director Christine Lagarde, who has been tapped to lead the European Central Bank, mean for Argentina?