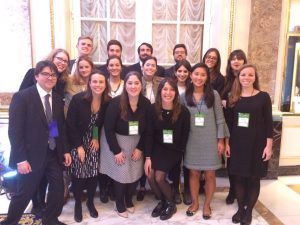 Cefeidas Group’s Managing Director Juan Cruz Díaz, in his capacity as Special Advisor to the President of the Americas Society/Council of the Americas (AS-COA) Susan Segal, led the organization of “Argentina: Economic and Political Perspectives”, an annual event held as part of the Council’s series of Latin American Cities Conferences.

Government officials, lawmakers and private sector leaders congregated at the Alvear Palace Hotel in Buenos Aires on August 24 to consider the political and economic outlook in Argentina.

Mayor of the City of Buenos Aires (CABA) Horacio Rodríguez Larreta identified education as a priority area for his government.

And a number of government and opposition provincial lawmakers – Juan Manuel Abal Medina (Buenos Aires province), Luciano Laspina (Santa Fe province) and Rodolfo Urtubey (Salta province) discussed what they consider to be the most important laws facing their legislatures.

The event was streamed through a live webcast and broadcasted by the @ASCOA Twitter account with the hashtag #councilARG.

To read a summary of the event, please visit here.