Will the G20 Shift Its Focus to Latin America’s Interests? 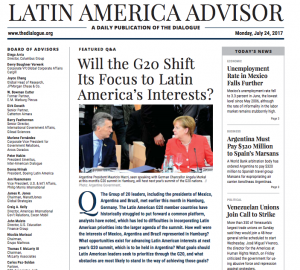 They responded to the following questions:

The Group of 20 leaders, including the presidents of Mexico, Argentina and Brazil, met earlier this month in Hamburg, Germany. The Latin American G20 member countries have historically struggled to put forward a common platform, analysts have noted, which has led to difficulties in incorporating Latin American priorities into the larger agenda of the summit. How well were the interests of Mexico, Argentina and Brazil represented in Hamburg? What opportunities exist for advancing Latin American interests at next year’s G20 summit, which is to be held in Argentina? What goals should Latin American leaders seek to prioritize through the G20, and what obstacles are most likely to stand in the way of achieving those goals?