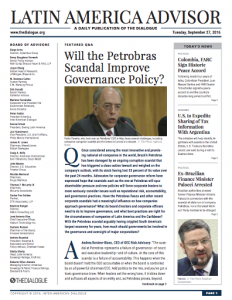 On September 27, 2016, Santiago Chaher, Managing Director of Cefeidas Group, and junior consultant, Megan Cook, were featured in the Inter-American Dialogue‘s Latin America Advisor. They commented on the following question:

“Once considered among the most innovative and promising national oil companies in the world, Brazil’s Petrobras has been damaged by an ongoing corruption scandal that has triggered a class-action lawsuit and weighed on the company’s outlook, with its stock having lost 53 percent of its value over the past 24 months. Advocates for corporate governance reform have expressed hope that scandals such as the one at Petrobras will spur shareholder pressure and new policies will force corporate leaders to more seriously consider issues such as reputational risk, accountability, and governance practices. Have the Petrobras fiasco and other recent corporate scandals had a meaningful influence on how companies approach governance? What do board directors and corporate officers need to do to improve governance, and what best practices are right for the circumstances of companies of Latin America and the Caribbean? With the Petrobras scandal arguably having crippled South America’s largest economy for years, how much should governments be involved in the governance and oversight of major corporations?”