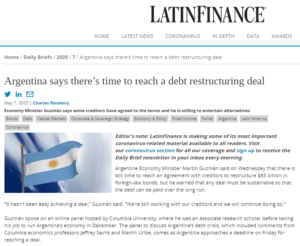 In an article published by LatinFinance on May 7, Cefeidas Group Managing Director Juan Cruz Díaz was quoted on Argentina’s debt restructuring deal and the pressures on the Alberto Fernández administration to avoid a default.

Juan Cruz Díaz, a managing partner at Cefeidas Group, an international advisory firm in Buenos Aires, said he expects the negotiations to stretch beyond Friday, saying the D-Day will be on May 22, when Argentina must pay the $500 million owed on the three Global Bonds or default. Both sides “are playing a game of chicken to see who gives in first,” he told LatinFinance.

Even so, there is social pressure to reach a deal. A poll by Poliarquía Consultores released Tuesday shows that 60% of Argentines want a deal, meaning that a default would hurt President Alberto Fernández’s popularity, Díaz said. “A default would be seen as a failure,” he said. “Argentina has recurrent problems, but we have learned a few things, and I think that in our collective unconscious a default is negative.”

It’s not just that a default would cut off access to financing and damage the country’s reputation, but it could allow the political opposition to make a run to return to power, Díaz said. “In this game of chicken, the bondholders have this in mind,” he said. “The government is playing hard, but at one moment it is going to have to ease up because they don’t want to default. There is too much at stake.”