What Do Results in Neuquén Say About Argentine Politics? 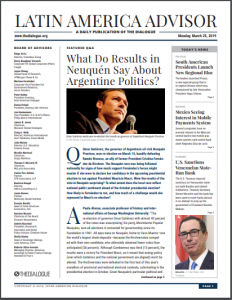 On March 25, The Dialogue published commentaries on the recent gubernatorial elections in Neuquén Province by Cefeidas Group’s political and regulatory risk lead specialist, Megan Cook and consultant, Bruno Binetti. They commented on the extent to which results of the Neuquén  elections reflects national sentiment, responding to the following questions:

Omar Gutiérrez, the governor of Argentina’s oil-rich Neuquén Province, won re-election on March 10, handily defeating Ramón Rioseco, an ally of former President Cristina Fernández de Kirchner. The Neuquén race was being followed nationally for signs of how much support Fernández’s forces might muster if she were to declare her candidacy in the upcoming presidential election to run against President Mauricio Macri. Were the results of the vote in Neuquén surprising? To what extent does the local race reflect national public sentiment ahead of the October presidential election? How likely is Fernández to run, and how much of a challenge would she represent to Macri’s re-election?