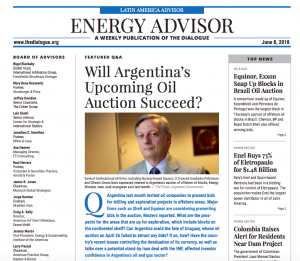 On June 8, the Dialogue published a commentary by political and regulatory risks specialists at Cefeidas Group, Rebecca O’Connor and Megan Cook in its Latin America Advisor. They commented on Argentina’s recent invitation to present bids for oil drilling and exploration projects and the effects of the stand-by loan deal negotiated with the IMF, responding to the following questions:

Argentina last month invited oil companies to present bids for drilling and exploration projects in offshore areas. Major firms such as Shell and Equinor are considering presenting bids in the auction, Reuters reported. What are the prospects for the areas that are up for exploration, which include blocks on the continental shelf? Can Argentina avoid the fate of Uruguay, whose oil auction on April 26 failed to attract any bids? If so, how? Have the country’s recent issues controlling the devaluation of its currency, as well as talks over a potential stand-by loan deal with the IMF, affected investor confidence in Argentina’s oil and gas sector?