Are Argentina’s Infrastructure Plans in Peril? 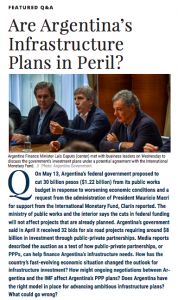 On May 18, the Dialogue published a commentary by political and regulatory risks specialists at Cefeidas Group, Rebecca O’Connor and Madeleine Elder in its Latin America Advisor.  They commented on the Macri administration’s public works spending and public-private partnership (PPP) plan, responding to the following questions:

On May 13, Argentina’s federal government proposed to cut 30 billion pesos ($1.22 billion) from its public works budget in response to worsening economic conditions and a request from the administration of President Mauricio Macri for support from the International Monetary Fund, Clarín reported. The ministry of public works and the interior says the cuts in federal funding will not affect projects that are already planned. Argentina’s government said in April it received 32 bids for six road projects requiring around $8 billion in investment through public-private partnerships. Media reports described the auction as a test of how public-private partnerships, or PPPs, can help finance Argentina’s infrastructure needs. How has the country’s fast-evolving economic situation changed the outlook for infrastructure investment? How might ongoing negotiations between Argentina and the IMF affect Argentina’s PPP plans? Does Argentina have the right model in place for advancing ambitious infrastructure plans? What could go wrong?