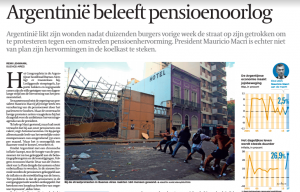 In an article written by Remi Lehmann on December 27 for Belgian newspaper De Tijd, lead specialist in the political and regulatory risk team at Cefeidas Group, Heidi Lough, commented on recent demonstrations held in protest of the Macri administration’s controversial social security reform, which was passed on December 19.

According to Heidi Lough, political analyst at international consultancy firm Cefeidas Group, this reaction was not entirely unexpected, “Macri’s approval ratings are steady, but this does not mean that voters support each economic reform”.

Although the law was passed after a 17-hour marathon session, the scenes were a strong contrast to the relative calm with which Macri has governed so far. According to Lough, this is due to the negotiating qualities of Macri’s minority government. “Even during the 2016 recession, the government was able to implement reforms without triggering major social conflict.”